In this paper we have stated that the space should be considered as a  “physical being”, moreover the physical being that is the base from which all physical phenomena are brought into existence.

However we are s till working on theoretical and experimental research with the aim of developing some applications and of understanding the unifying key for the physical laws of nature.

In the research for an unifying theory of QST new categorization should be introduced. The physical space is not only the vacuum but a mean, it is the result of the energy transfer from the electromagnetic waves that had and that are passing through it. This statement has as a consequence that the matter is a stationary electromagnetic wave on local equilibrium with the space.

The first logical step in the QST is the establishment of a connection between the quantization of energy and the quantization of the physical space. From the quantum of action given by Planck’s constant (h) we have hypothesized a reation quantum, equal and opposite to the energy quantum, from which the phys cal s pace is born.

Besides this evidence, it has been stated also that resonance is the mechanism that interacts with the space to give birth to physical matter.

Under these axioms the matter is seen as condensed, compressed space in resonance.

It should be pointed out that we are not intending to reintroduce the Greek concept of ether. The physical space is not seen as a form of matter, but its response to a dynamical excitation along with the resonance mechanism permits an elegant description of the physical reality without any dualism. The dualism matter-wave could be solved from Maxwell evidence. The electric and magnetic properties of the space are only related in the dynamic mode. The dynamic link between the elec tr ic and magnetic fields gives room to a resonance frequency, more properly to a place and volume in the space where the born and derivate magnetic fields curve the space. This link autosupport and traps in resonance the electric perturbation that generates the electron (first resonance).

What is the resonance phenomena?

In this paper resonance is defined as the behaviour obtained when the energy emitted from one structur e is auto-accumulated and a stationary wave is generated. A stationar y wave comes from the resonance phenomena but it requires a structure that conserves its dynamism. The cause (wave) and the resonant structure (matter) are respectively content and container. In the container the content flows.

A typical example is the electrical circuit LC where two parameters, inductance and capacity permit the existence of a stationary wave. When a resonance phenomena occurs, it is not always necessary to have a structure (matter ) that supports the wave. There are some cases when the space resonates and auto-structure itself and behave as a physical matter.

Some background, It is well known that if a particle charged q is thrown with velocity v in a certain region of the space where a constant magnetic field B, orthogonal to the velocity vector , is present, the force (given by Lorentz) is :

Then, from Newton’s second law:

Then, the trajectory of the particle will have a radius r :

It s hould be noted that the fr equency of cir cular movement is a constant, that means that a charged particle passes through the same point in the space in the  ame period of time no matter its velocity. Infact, if the particle velocity is given by:

by substituting we obtain

This frequency is called Larmor frequency.

This background could be used to place the QST, given that the structure of the electron has never been found and hypothesizing that the electron is a small oscillator. We can calculate its Larmor frequency and conclude that:

The electron is a cyclotron of itself

In order to calculate the frequency of the electron-cyclotron the magnetic field B that acts on the electron charge is given by:

Where 2πr is the trajectory of the electron. The current I is given by:

Where t is the time taken by the charge of the electron to rotate around itself. Using all this information the magnetic field B is given by:

Let’s remember that the fine structure constant α (named also Sommerfield’s constant) is the ratio of the velocity of the electron in the first orbit of the hydrogen atom and the velocity of light c. Thus, the previous result constitutes a redundancy of the physics of electrons inside an atom.

Physical properties of the space To better understand the physical reality of the s pac e we can begin from three well known properties :

radiation impedance, magnetic permeability and permittivity of the vacuum.

The impedance of the vacuum is given by:

and the electric resistance formula of a given material is :

Let’s try and link this last formula to the impedance of the vacuum. Since neither ρ0 nor l nor S are known, let’s begin our approach from the capacity of a capacitor that has the vacuum as dielectric material

We obtain for the capacity

But the capacity is given also by

This equation has only one parameter (frequency). This fr equency is associated in this paper to the Compton frequency of the electron and it cons titutes the resonance frequency of the physical space.

The value of ρ0 could be calculated also from Compton’s electron wave length, the velocity of the light and the permittivity of the vacuum:

This equation could be seen as the first step for a new physical space paradigm. The space seen from the electronic point of view. The mentioned resistivity of the s pace could not be considered static. If it were static, it could be measured with a common ohmmeter. Conversely this resistivity of the space appears when a variable electric or magnetic field is present in the space.

Let’s see the dimension of the mentioned properties.

It could be seen also as

For the permittivity of the vacuum

And for the magnetic permeability

It could be noted that all current given by

From these equations, using the mass, the wave length and the frequency of the electron we can obtain the same value of current : 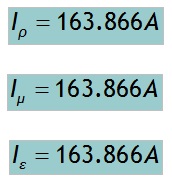 These currents, that we can call space currents , are stationary currents in the quantum of the space that determinate the existence of the electron.

this is equal to the Compton wavelength of the electron

where f  is again related to the Compton wavelength of the electron. And the last equality, which is verified too, is

From this last equation it could be verified that the electron constitutes the first resonance of the vacuum.

In our previous work, mentioned above, we linked the quantized Hall effect resistance to the intrinsic electron resistance.

becomes as follows for an electron.

And is well known that

given in Farad per second, is an intrinsic characterstic of the space, linearly related to the variation (inversion) of the electric field:

From the electric point of view,

can be seen as the electric impulse over its energy, and exactly

Considering the following relationships between both constants :

If we equal the firs t expression, whose dimension is ohm, to the vacuum space impedance, and the second one, which is dimensionless, to the fine structure constant, we get to determine the value of these two new properties :

It is clear now our vision of the physical reality. The space is a physical entity and its electromagnetic properties are the basis of matter generation.

The space is not only the empty container but and active part of the phenomena immersed in itself. It could be defined as a neutral charge.

The space is not an mere empty stage.

The space is made of the energy yielded by all the electromagnetic waves that have and are passing through it.

The space could be seen as a neutral charge.

The space have electric and magnetic properties.

The space is a superconductor of all electromagnetic energy that passes through it.

The electric and magnetic properties of the space are only dynamically linked.

The electron and all the matter are resonance of the space.

The electron constitutes the first resonance of the space.

The proton is the resonance of the electron.

The dark matter of the Universe is the space.

The matter is in dynamic equilibrium with the space.